Internment during World War II in Queensland took many forms. Allied prisoners of war (POWs) of German, Italian and Japanese origin, were brought here following capture in battle overseas. Enemy ‘aliens’ or residents of Australia with ‘perceived’ links to Axis nations were also placed in camps, for fear of enemy attack, spying or espionage. Many of these residents, including Indigenous Australians spent the war years behind wire. Due to the vast numbers of troops located in Australia whilst training or awaiting departure overseas, incidents occurred requiring internment of Allied troops under military law.

The Australian Government’s initial response to the declaration of war was the introduction of emergency powers dealing with censorship, espionage, propaganda and the sweeping legislative powers contained in the Commonwealth War Book and enforced through national security regulations. Australian residents of non-British origin were subjected to government investigation and categorised as ‘allied’, ‘neutral’ or ‘enemy’ depending on the military alignment of their ethnic background.

In January 1942 a motion was carried at a special meeting of the Cairns City Council that all ‘enemy aliens’ be rounded up. If not interned, those branded as enemy aliens needed police permits to travel outside their residential district, their mail was intercepted and they were forbidden to work in strategic occupations. Of all states, Queensland had the highest proportion of its ethnic population interned during World War II with 43 percent held in southern Australian detention camps. The first train load of internees left Queensland for camps in central Victoria in February 1942.

Australian authorities established internment camps for three main reasons–to prevent residents from assisting Australia's enemies, to appease public opinion and to house overseas internees sent to Australia for the duration of the war. At the peak of the invasion threat in 1942, more than 12,000 people were interned in Australia.

Queensland internees were housed in a fenced off section of the Enoggera Military Base, referred to as the Gaythorne internment and prisoner of war camp. The camp was established in Brisbane soon after the declaration of war in 1939. After 1942 the camp was enlarged to accommodate 1800 people in five separate compounds of between 300 and 500 people each. Those interned during World War II included family groups with children and the elderly. They were primarily of German, Austrian and Italian descent.

When war was declared, Italians were the largest non-British group in Australia. Some 7000 people of Italian birth were living in north Queensland. Thousands more were of Italian descent. The first Italian workers had arrived in the region in the 1890s, followed over the next 40 years by relatives from their home villages. In north Queensland, they worked as cane cutters, fruit pickers and tobacco farm labourers. Many were drawn to established Italian communities around Innisfail, Ingham, Cairns, Proserpine and on the Burdekin delta.

When Italy entered the war in June 1940, this highly visible minority group soon felt the deep-seated hostility of Australian locals. It was believed that some of these Italians were responsible for fifth-column espionage activities including the use of secret radio transmitters. Italian community leaders in the cane growing districts were among the first to be interned. Men were arrested regardless of whether their loyalty was proven or not. Families left behind were faced with the task of sometimes single-handedly looking after farms and businesses.

When Japan entered World War II in December 1941, most Japanese nationals in the South-West Pacific Area, including New Zealand, the New Hebrides, New Caledonia and the Netherlands East Indies, were apprehended and over 4000 were transported to Australia for internment. Australia took the same measures and interned 1141 people of Japanese descent, including many second and third generation residents from Darwin, Broome and Thursday Island in the Torres Strait.

People of Japanese descent had worked and lived in the Torres Strait for decades. They played a key role in the pearling and beche-de-mer fishing industries that had expanded during the 1870s. Many of the pearl divers based on Thursday Island were Japanese, from the Malay peninsula. Others were ship builders, boat repairers and store keepers. By the late 1930s, the population of Thursday Island had reached 2200 including about 600 Japanese. The balance of the island’s population was a mixture of Europeans, Torres Strait Islanders, Chinese and Malays.

Within days of the Japanese attack on Pearl Harbor all people of Japanese descent on Thursday Island were detained in their homes. A barbed wire barrier was erected around ‘Jap Town’ or ‘Little Yokohama’ as the Japanese quarter was locally known. Australian troops stationed on Thursday Island acted as prison guards. After three weeks of internment, the members of the Japanese community were shipped to the mainland. Most spent the war at the Tatura internment centre in central Victoria.

During World War II a number of Japanese prisoners of war captured by the Allies during fighting in New Guinea and the islands of the south-west Pacific, were transported to Australia for confinement and interrogation. An old mansion named ‘Tighnabruaich’ at Indooroopilly in Brisbane was used during the interrogation of Japanese POW’s. The house was requisitioned by the military in October 1942, and subsequently named ‘Witton Barracks’. A joint US-Australian intelligence unit called the Allied Translation and Interpretation Section (ATIS) handled captured Japanese, who were held in cells on the grounds. ‘Nisei’ or ethnic Japanese-Americans who handled much of the interpretation were housed nearby.

Several small Japanese POW camps were formed in Queensland with one reported at Thompsons Point near Rockhampton. However, the Queensland camps held fewer prisoners than the Cowra camp in central New South Wales from where over 500 Japanese POW’s attempted to break out in 1944, resulting in the deaths of 231 Japanese and four Australian soldiers.

After Japan entered the war, concerns regarding the loyalties of Aboriginal people led to claims by white Australians that Aborigines in north Australia would assist the Japanese. Cape Bedford mission near Cooktown was run by George Schwarz, a German-born Lutheran pastor who had arrived at the mission in 1887. By the early 1940s the mission station was located at Spring Hill on the Endeavour River. Schwarz and his wife owned a farm nearby at a place known as the Eight Mile where he produced food for the mission population, assisted by the Aboriginal men.

Because Pastor Schwarz was of German descent, Army Intelligence regarded the mission as a potential security problem. When local whites claimed the mission Aborigines were disloyal, the army moved in. At dawn on the morning of 17 May 1942 the army and local police arrived with a convoy of trucks to arrest Pastor Schwarz and remove the Aboriginal people. They removed 254 Aborigines, mainly Guugu Yimidhirr people from the Eight Mile and Spring Hill, taking them to Cooktown, then onward to Cairns. The elderly were sent to Palm Island: 200 or more were dispatched to Woorabinda near Rockhampton. The Cape Bedford people found Woorabinda cold and inhospitable. Twenty-eight people died in the first month: by March 1943, 60 had lost their lives. Within weeks of their removal, construction of a RAAF airfield was underway at Schwarz’s Eight Mile farm. In 1949 the surviving Guugu Yimidhirr people returned home to Cape Bedford to a new mission site called Hope Vale.

At the end of the Second World War the internment camps were closed down. Many internees, particularly Italians, were released before the end of the war due to Italy’s surrender and signing with the Allied forces. Others were allowed to leave the camps after hostilities ceased. Internees of British or European origin were permitted to remain in Australia after the war, including those who had been brought from overseas by British authorities. Most of those of Japanese origin, however, including some who were Australian-born, were repatriated to Japan in 1946.

Many of the POW’s and enemy alien internees were employed by local farmers and industries that came to depend on their labour. Their assistance was missed at the end of hostilities when internees and POW’s were either repatriated to their countries of origin or permitted to return to their Australian homes. Accounts of their experiences differ and a number of former ‘enemy aliens’ who were repatriated at the end of the war, later returned to live in Australia.

Another wartime internment group was personnel from the Allied military forces held in detention camps charged with civil and military offences. Allied personnel occupied prisons and detention barracks across Queensland for offences ranging from drunk and disorderly, to conduct unbecoming a soldier, and also murder and rape. Each Allied force had their own prisons and each was conducted with military discipline and routine.

In Brisbane military prisons existed at Boggo Road Gaol, Enoggera, Grovely and the US Lafayette Stockade at Eagle Farm. Other detention camps were formed at Warwick and in Townsville at Stuart Prison, North Ward and Garbutt. In addition, most camps and Base Section headquarters had holding yards for prisoners awaiting transfer. Prisoners serving long sentences were sent to either Brisbane or Townsville. Long term US military prisoners were sometimes transferred to Fort Leavenworth Prison in America.

Boggo Road Gaol at Dutton Park in Brisbane was used during World War II as a holding centre for troublesome military prisoners while they awaited court martial. Military hearings were held almost daily in the prison concert hall. Many soldiers received their ‘Services No Longer Required’ discharges which were affectionately known as ‘Snarlers’. Most were happy with this outcome when it was handed down. 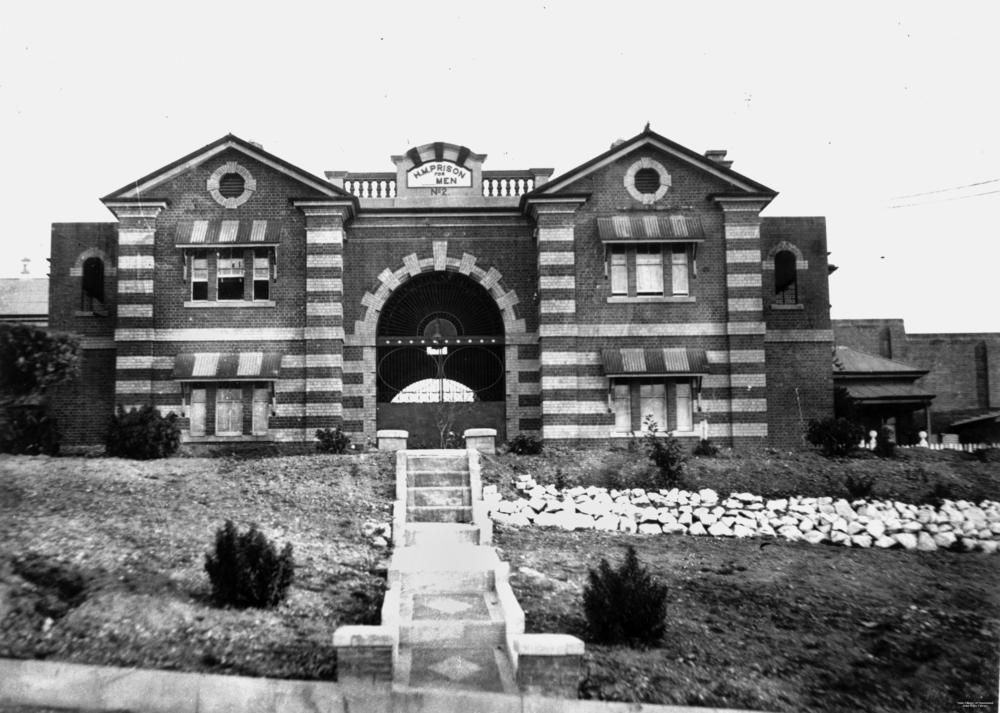