During World War II in the South-West Pacific, the United States evolved to be Australia's largest ally. But the reality was that forces of many other nations supported and defended Queensland, or utilised the region for offensive attacks on the Japanese. Other forces sought refuge after defeat or withdrawl, to re-build and re-stock for future operations. All Australia's allies added extensively to Queensland's heritage.

Before Japan was finally defeated the streets of Brisbane saw Australian, American, Dutch, Free French, Chinese, New Zealand, South African, Indian, British and Canadian uniforms. Apart from the huge American presence, among the larger Allied contingents in Australia during the war were the British and the Dutch.

Britain was hard-pressed to assist Australia on the outbreak of war in the Pacific, with most of its forces, including overseas units of the Australian Army, Navy and Air Force, fully committed in a desperate conflict with Germany over Europe and in the Mediterranean and the Middle East. However, Britain was still able to assist Australia with the supply of prototype radar equipment despite the extreme demands of the Battle of Britain, spurring an innovative period of experimentation by Australian scientists at the University of Sydney’s, Radiophysics Laboratory. Within months of the Japanese assault in the Pacific an Australian radar network based on experimental technology was under construction along the Queensland coast.

With the shock surrender of the British base at Singapore in February 1942, Britain asked Australia to provide facilities to carry out experiments in chemical warfare to determine the effects of various poisonous gases, including mustard gas, on personnel and equipment in tropical conditions. A British chemical weapons expert was sent to Australia to train local scientists and medical officers and to supervise the trials and evaluate the effects. After initial tests which were held at Townsville in 1942, arrangements were made for scientists from the Porton Down experimental station in the United Kingdom to come to Australia and participate in further tests near Innisfail. Research into the effects of various poison gases, especially mustard gas, was conducted in the belief that the Japanese had chemical weapons in New Guinea.

A Chemical Warfare Research and Experimental Section was established by the Department of Munitions in an extensive complex of laboratories and barracks at Gunyarra railway siding, near Proserpine. The restricted camp was later renamed the 1st Australian Field Experimental Station. By mid-1944 Gunyarra accommodated about 600 personnel including British and Australian scientists, and observers from the Australian Chemical Defence Board, US Military, South African Army and New Zealand Navy.

From mid-1944 as the war in Europe began drawing to a close, a steadily increasing number of Royal Navy warships were dispatched to the Pacific theatre of war to join the US Fleet in the final campaign against Japan. The British Pacific Fleet was formed in November 1944 and at its peak comprised over 100,000 personnel on four battleships, 18 aircraft carriers, eleven cruisers and many escort vessels. RAN units including six destroyers and 18 corvettes also served with the British Pacific Fleet. Brisbane became an important port for the fleet because of its heavy ship repair facilities, ordnance storage capacity, medical services and shore leave facilities. The Royal Navy in Queensland set up its own establishments at Brisbane and Maryborough. Brisbane city played host to over a hundred Royal Navy ships, including battleships up to 35,000 tons displacement and heavy fleet aircraft carriers. A large fleet train of auxiliary vessels was also present to replenish the warships.

The Netherlands East Indies (now Indonesia) was a colony of Holland, formed by the Dutch East India Company. During the early months of World War II, Holland surrendered to the invading German forces and set up a government in exile in London. The Dutch government in London declared war on Japan after the Japanese attack on Pearl Harbor in December 1941. As had been the case with Holland, the defence of the Netherlands East Indies (NEI) had been neglected by the Dutch. Naval strength was based around several out-dated cruisers and the large colonial army was made up mostly of Indonesian soldiers led by Dutch officers.

The Dutch participated in the short-lived American, British, Dutch and Australian Command (ABDA) for the defence of South-East Asia against the Japanese advance and was sometimes known as the ‘Fourth Ally’. Despite its efforts, in less than three months of fighting the NEI was overrun by the Japanese. Dutch forces bore the brunt of the fighting, losing nearly all their navy, almost 300 aircraft and most of the Royal Netherlands Indies Army–the KNIL. In supporting the Dutch, Australia, Britain and the US suffered the loss of HMAS Perth, HMAS Yarra, HMS Exeter and USS Houston.

The Dutch surrendered to the Japanese on 8 March 1942. However, a number of key personnel in the NEI government as well as some aircraft and crew managed to escape to Australia to establish an interim administration with the assistance of the Australian government which had offered to help with reorganising and re-equipping surviving forces. Dutch refugees and material assets including aircraft and merchant shipping were initially concentrated in Sydney, while general intelligence coordination under the Netherlands East Indies Forces Intelligence Service (NEFIS) was moved to Melbourne so as to be close to Australian Army headquarters at Victoria Barracks.

As Japanese patrols became active on the southern coast of Dutch New Guinea, the NEI Commission in Australia decided to move about 700 political prisoners and their guards from the Tanah Merah internment camp in the Merauke district. The camp held the leaders of the 1926 nationalist uprising against the Dutch administration in the NEI and the Allies were unjustly concerned the internees might escape and aid a Japanese advance. A large group of women and children were separated from the men and landed at Mackay in June 1943 where they became the responsibility of the Dutch Consul in Brisbane.

The Australian Waterside Workers Union and other trade unions became involved in a campaign to free the Tanah Merah internees. The NEI Commission, under pressure from the Australian government, finally released some of the internees for employment with the KNIL labour battalion at Wallangarra where they continued to promote the cause of Indonesian nationalism. The wives and children of the internees were sent to Mackay where other NEI evacuees were living. Another large concentration of Indonesian members of the NEI Army was camped with family members at the KNIL labour battalion barracks at Casino in northern New South Wales.

The NEI Commission based in Melbourne, formed a government-in-exile in 1944 and in September of that year the administrative departments of the Commission, including KNIL Headquarters and NEFIS, together with consulate offices and the NEI Red Cross, occupied new headquarters at Camp Columbia at Wacol near Brisbane, from where the organization operated until the end of the Pacific war.

Camp Columbia was one of three camps built at Wacol in 1942 for use by US Forces. It had previously been occupied by Headquarters of the US 6th Army prior to its transfer to Hollandia with General MacArthur. The Dutch regarded Camp Columbia as the temporary seat of the NEI government, pending their return to Indonesia. 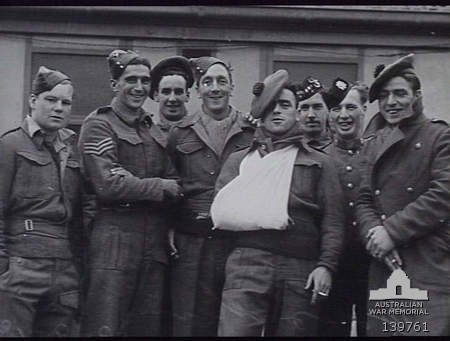